I have had amazing opportunities to work with great performance makers both in Australia and internationally as an actor, singer and collaborator. Here are a few of the productions I have taken part in and some of the wonderful people I have worked with:

Something Like A Kiss – with Robert Stephens, Arts Centre Melbourne 2014

The Teapot Ensemble of Australia – with Karen Berger, Carolyn Connors, Kate Neal and David Adamson, 2005 and 2009 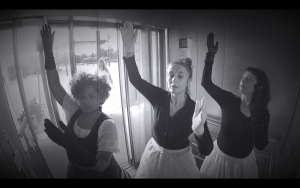 Bottlenecked – with Amaara Raheem, Karen Berger and Sarah Wilmot (as part of Elevate1 a global day of Performance, Interventions and Think Pieces in elevators all over the world), Melbourne Museum 2017

The Now Hour – I and II – directed by Michael Camilleri, Melbourne Fringe 2004

“Susan’s voice is an extraordinary instrument and her intelligence as an artist drives continual experiment. She is bold, far seeing and sings like a monster and an angel.”    Michael Camilleri, 2017

“Susan Bamford is superb…” The Benevolent Father, The Melbournian, 1994